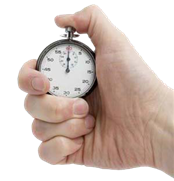 A wealth of evidence shows that children’s ability to understand numerical magnitude (quantity) is a critical building block of early math skills. Numerous studies have shown that children who are faster and more accurate at comparing which of two numbers is larger are also those that perform better on standardized measures of math achievement, such as tests of arithmetic achievement. For a review see De Smedt et. al 2013.  There is evidence showing that both the ability to compare numbers that are presented as symbols (e.g. the Arabic Numerals; 1,2,3…) and non-symbolically (e.g. clouds of dots or collections of objects) is related to individual differences in children’s present and future math skills. For example:
​
It should be noted, however, that there is more consistent evidence for an association between symbolic numerical magnitude comparison performance and arithmetic skills than there is for a relationship between non-symbolic processing abilities and calculation abilities.
​Most of the current evidence showing the importance of early numerical magnitude processing skills has come from tests that are run on a computer. The motivation behind designing the numeracy screener was to build a simple paper-and-pencil tool that could be administered efficiently and with ease without requiring technology. This may be particularly useful in the context of testing in low-income countries where computers may not be widely available in classrooms. Furthermore, the aim was to design a test that would be easy to score. Computerized measures require the extraction of data such as reaction time and accuracy, while the numeracy screener simply requires the person administering the test to count up the total number of test items correctly answered.